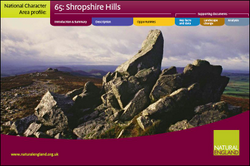 The Shropshire Hills National Character Area (NCA) is a landscape of rugged and mostly bare-topped hills, contrasting with mixed agriculture in intervening valleys and dales. This tranquil landscape of national importance flows almost seamlessly into the neighbouring hills of Clun and North West Herefordshire Hills NCA to the south, but contrasts markedly with the flat and lowly undulating Shropshire, Cheshire and Staffordshire Plain NCA to the north. To the east, the Shropshire Hills stand above and overlook a complementary landscape of rolling landform, intricate field patterns, and the parklands and numerous woodlands of the Mid-Severn Sandstone Plateau. The Shropshire Hills are characterised most strongly by the series of relatively wild hills and ridges that lend the area its name. The historic town of Ludlow sits to the south, with the settlements of Craven Arms to the north-west and Church Stretton in the centre of the area.
Further information