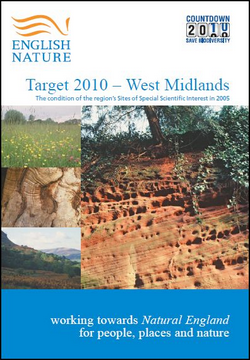 The West Midlands region is made up of Herefordshire, Shropshire, Staffordshire, Warwickshire, and Worcestershire together with Metropolitan Authorities of the West Midlands conurbation. It is a region of sharp contrasts, supporting a rich and varied natural environment and includes some of the most sparsely and densely populated parts of England. Parts of the region have a distinct upland character, including the Staffordshire Moors in the north east and the Welsh border country of Herefordshire and Shropshire, characterised by thinly settled, open landscapes of high wildlife value. The region includes part of the Peak District National Park and all or part of five Areas of Outstanding Natural Beauty – Cannock Chase and the Shropshire Hills in the north, and the Malvern Hills, Cotswolds and Wye Valley in the south. The quality and character of these landscapes owes much to the extent of semi-natural habitats including acid grassland, rough pasture, heathland/moorland, and native broadleaved woodland. The West Midlands are also characterised by the major river systems of the Trent, Severn and Wye that cross the region, and support a number of internationally important wetland sites.
This document is published for historic and research purposes.