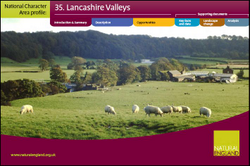 The Lancashire Valleys run north-east from Chorley through Blackburn and Burnley to Colne. The National Character Area (NCA) lies mainly in east Lancashire and is bounded to the north-west by the Bowland Fells fringe and the Millstone Grit outcrop of Pendle Hill, and to the south by the Southern Pennines. A small proportion of the area (5 per cent) lies in the Forest of Bowland Area of Outstanding Natural Beauty.
The Lancashire Valleys broadly consist of the wide vale of the rivers Ribble and Calder and their tributaries, running north-east to south-west between the natural backdrops of Pendle Hill and the Southern Pennines. This visually contained landscape has a strong urban character.
The Lancashire Valleys are underlain by Carboniferous rocks including limestone, Millstone Grit, shales and Coal Measures. The bedrock is largely covered by glacial and post-glacial deposits of sands, gravels, clays and alluvium. Localised surface exposures of bedrock have given rise to extractive industries, including stone quarrying and coal mining.
Further information