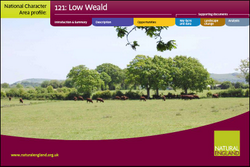 The Low Weald National Character Area (NCA) is a broad, low-lying clay vale which largely wraps around the northern, western and southern edges of the High Weald. It is predominantly agricultural, supporting mainly pastoral farming owing to heavy clay soils, with horticulture and some arable on lighter soils in the east, and has many densely wooded areas with a high proportion of ancient woodland. Around 9 per cent of it falls within the adjacent designated landscapes of the Surrey Hills, Kent Downs and High Weald Areas of Outstanding Natural Beauty and the South Downs National Park. Around 23 per cent of the area is identified as greenbelt land.
Further information