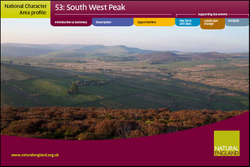 The South West Peak is an area of upland and associated foothills in the south-west region of the Pennines. It lies in the south-west part of the Peak District and 65 per cent of the National Character Area (NCA) falls within the Peak District National Park, which was Britain’s first National Park, being designated in 1951. The South West Peak stretches from just south of Stockport in the north to Leek in the south, and is contained by the fringes of Buxton and Macclesfield to the east and west.
It is an upland landscape characterised by Carboniferous age Millstone Grit and Coal Measures and is often scenically and distinctly diverse. The area has an open moorland core. Strong ridges such as Morridge run north to south. The moorland core fringes fall away to gentle slopes, dissected by steep wooded cloughs, and fast-flowing streams are found at lower elevations. These open out to form wider upland river valleys, some of which include reservoirs such as Errwood and Tittesworth, and are also characterised by permanent grassland with rushy pasture, species-rich hay meadows and improved productive farmland. This working landscape is dominated by livestock farming; the fields are medium to small in size and bounded mostly by drystone gritstone walls, with some hedgerows at lower elevations. The settlement pattern is dispersed with small settlements, traditional farmsteads and isolated field barns predominantly built of local stone, reflecting the geology, history and local building traditions.
Further information