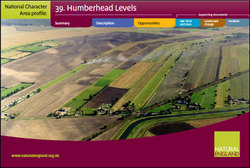 The Humberhead Levels is a flat, low-lying and large scale agricultural landscape bounded to the west by the low ridge of the Southern Magnesian Limestone and to the east by the Yorkshire Wolds (north of the Humber) and the Northern Lincolnshire Edge with Coversands (south of the Humber). To the north it merges into the slightly undulating landscape of the Vale of York, at the line of the Escrick Moraine, and in the south it merges in to the Trent and Belvoir Vales and Sherwood.
Further information