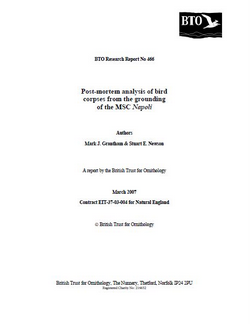 After being damaged by Hurricane Kyrill, the MSC Napoli was deliberately run aground in Lyme Bay, Devon (SY2187) on 20 January 2007. Over the following weeks, a significant volume of fuel oil was spilled into the bay, spreading to cover at least 8km of coastline, and large numbers of dead and dying birds were washed ashore around the bay. Volunteers from the RSPB and RSPCA, members of public and wildfowlers were able to collect many bodies for post-mortem. A sample of these birds, were stored at the CEFAS laboratory in Weymouth, where the authors were able to undertake post-mortem analyses on 19-21 February 2007.