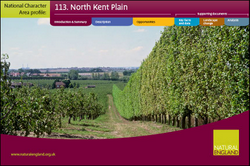 The North Kent Plain National Character Area (NCA) is the strip of land between the Thames Estuary to the north and the chalk of the Kent Downs to the south. The area is open, low and gently undulating. It is a very productive agricultural area with predominantly high-quality, fertile loam soils characterised by arable use. Traditional orchards, soft fruits and other horticultural crops exist in central and eastern areas giving rise to the use of the title ‘Garden of England’. There is an extensive area of ancient woodland around Blean, plus significant ancient woodlands further west. However, it is generally an open landscape: characteristic shelterbelts occur within the fruit-growing areas, but the agricultural land is mostlydevoid of hedgerows.
Further information