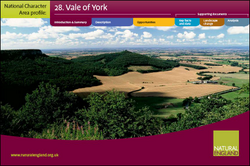 The Vale of York is an area of relatively flat, low-lying land surrounded by higher land to the north, east and west. High-quality soils across most of the National Character Area (NCA) mean that arable cultivation is the predominant land use, although some pig and dairy farming takes place in the western parts of the NCA. A key feature of the NCA is the rivers that drain surrounding higher land and run southwards through the Vale on towards the Humber basin. Natural flood plain habitats and associated species are still found within the Lower Derwent Valley (designated as a Special Protection Area, Special Area of Conservation and Ramsar site) although, like other flood plains, this area is threatened due to water quality issues.
Further information