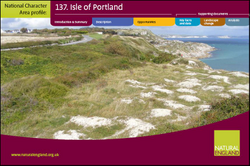 The Isle of Portland, the southernmost part of Dorset, is a tied island and is connected to the mainland, the Weymouth Lowlands National Character Area (NCA), by a shingle spit between the island and Chesil Beach; the latter can – although rarely – be overtopped by waves. The habitats of the west side of the Isle, extending into Chesil Beach and the Fleet, are of international importance and designated a Special Area of Conservation (SAC). Portland provides a barrier sheltering the sea and coast of Portland Harbour and Weymouth Bay to the east from storm waves coming from the west. In the north there are steep, rugged cliffs with immense fallen blocks of rock at their base. The cliff habitats of the east side of the Isle are also of international importance and form part of the Isle of Portland to Studland Cliffs SAC. The plateau land slopes southwards, finally dipping into the sea at Portland Bill, where its presence creates the famous tidal race.
Further information