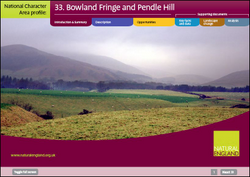 The Bowland Fringe and Pendle Hill National Character Area (NCA) is a transitional landscape that wraps around the dramatic upland core of the Bowland Fells, underpinned by Carboniferous geology. Over half of this NCA, along with the Bowland Fells, makes up the Forest of Bowland Area of Outstanding Natural Beauty. This is a diverse landscape of herb-rich hay meadows – several of which are nationally and internationally designated – lush pastures, broadleaved woodland, parkland and waterbodies (including rivers and streams supporting nationally and internationally protected species). The numerous river valleys and associated woodlands are a major component of the area. To the west, this NCA includes part of the Bowland Fells Special Protection Area (SPA), designated for its important populations of hen harrier, merlin and lesser black-backed gull. The influence of human habitation and activity, and the area’s long farming history, contribute significantly to its character. In contrast to the predominantly rural feel of the area, this NCA includes several relatively urban areas including Clitheroe, Bentham and Longridge.
Further information