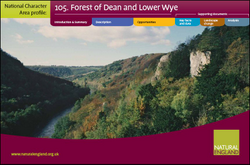 The Forest of Dean and Lower Wye National Character Area (NCA) is bounded by the Wye Gorge, largely forming the Welsh border, to the west, the plain of South Herefordshire to the north, and the wide valley of the River Severn and Estuary to the south and east. The area is triangular in shape, tapering to a point in the south where the Wye opens into the low-lying Severn vale at Chepstow. The central plateau, lying between 150 m and 250 m, dominated by the statutory forest, opens out into an undulating landscape of arable and pasture to the south and the west.
The landscape is a mosaic of woodland and open ground, a characteristic of medieval hunting forests. The extent of the woodland in the NCA (41 per cent of the area) makes an important national contribution to climate regulation and timber provision. The area is nationally important for woodland birds and butterflies. There are three designated Special Areas of Conservation (SACs) within the NCA: the River Wye; the Wye Valley Woodlands, containing an important range of woodland stand types and rare species including three species of whitebeam; and the Forest of Dean and Lower Wye Valley Bat SAC, which is internationally important for its population of lesser and greater horseshoe bats.
Further information