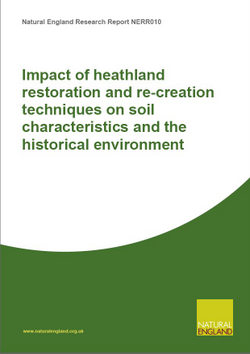 Under the first Soil Action Plan for England, Natural England has to have regard to the proper management of soil alongside other requirements. However, the conservation and restoration of habitats such as heathlands, also supported and promoted by Natural England, involves widely-used techniques which could potentially pose a risk for the soil and archaeological interest of soils.

A project was set up in 2007 to define the importance of heathland soil features and their archaeological interest and the risk of damage through current practices. The extent to which heathland restoration and re-creation have altered soils, or not, was explored through a questionnaire sent to 66 site managers and advisors. A total of 26 questionnaires were completed covering a wide range of restoration and re-creation projects of varying size in a variety of geographical locations across the UK in the last 10 years.