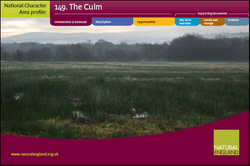 The rolling ridges and plateaux of the Culm extend across north-west Devon and north-east Cornwall, reaching from the foot of Dartmoor in the southwest and the edge of the Cornish Killas in the west, to the spectacular Atlantic coast of cliffs and sandy beaches in the north. North-eastwards they meet the Exmoor landscape and stand high above the Devon Redlands. The open, often treeless, ridges are separated by an intricate pattern of small valleys forming the catchments of the Rivers Taw, Torridge and Mole. This is largely a remote and sparsely populated landscape.
Further information