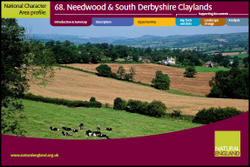 Needwood and South Derbyshire Claylands National Character Area (NCA), though divided by the River Dove’s wide flood plain, is predominately a rolling plateau that slopes from the southern edge of the Peak District to the valley of the River Trent in the south-west. Also in the south are frequent plantations and ancient woodlands of the former Forest of Needwood. Elsewhere, the extensively hedged and pastoral landscape is dominated by mixed farming and features a dispersed pattern of villages and other settlements. Hedgerow trees also contribute to the wooded character of this NCA. Internationally important wetland habitats that include Chartley Moss and Pasturefields Saltmarsh nature reserves occur in the west of the area. Part of the Derwent Valley Mills World Heritage Site and The National Forest are situated on the eastern side of the NCA. To the north and west respectively are found small parts of the Peak District National Park and Cannock Chase Area of Outstanding Natural Beauty.
Further information