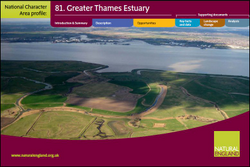 The Greater Thames Estuary National Character Area (NCA) is predominantly a remote and tranquil landscape of shallow creeks, drowned estuaries, lowlying islands, mudflats and broad tracts of tidal salt marsh and reclaimed grazing marsh that lies between the North Sea and the rising ground inland. It forms the eastern edge of the London Basin and encompasses the coastlines of South Essex and North Kent, along with a narrow strip of land following the path of the Thames into East London.
Despite its close proximity to London, the NCA contains some of the least settled areas of the English coast, with few major settlements and medieval patterns of small villages and hamlets on higher ground and the marsh edges. This provides a stark contrast to the busy urban and industrial areas towards London where population density is high and development pressures are
increasing. Sea defences protect large areas of reclaimed grazing marsh and its associated ancient fleet and ditch systems, and productive arable farmland. Historic military landmarks are characteristic features of the coastal landscape.
Further information