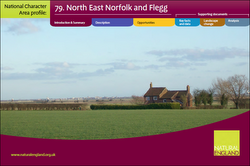 The North East Norfolk and Flegg National Character Area (NCA) slopes gently from west to east and is divided into three parts interspersed by The Broads National Character Area (NCA. Inland it is a rich agricultural area with small- to medium-scale fields, and is mainly unwooded. Isolated farmsteads and small nucleated villages with large medieval churches are linked by a dense network of lanes.
The coast is a prominent feature of the NCA. In the north, the coast is fringed with soft sediment cliffs that are naturally eroding inland, especially at Happisburgh. These soft cliffs have internationally important geological exposures and also a range of important soft cliff habitats. The only fossilised human footprints ever found in Europe and more than 800,000 years old, were discovered here in 2013. Maritime cliff grassland is present along this section of the coast, particularly at Mundesley. Dune habitats are also present further south, with associated dune grassland habitats and dune scrub. The Scroby Sands Wind Farm that lies off Great Yarmouth provides a backdrop to coastal views in the south, and in the north the Bacton Gas Terminal is a dominant feature on the coast. There are four international nature conservation designations, a National Nature Reserve and a Ramsar site.
Further information