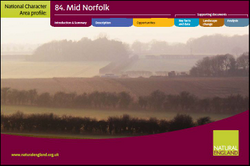 The broadly flat, rural landscape of the Mid Norfolk National Character Area (NCA) occupies the northern section of the East Anglian Plain, becoming more undulating to the north where it merges with the Central North Norfolk NCA in a curving line across the Wensum Valley, and more rolling towards Norwich to the east. This is ancient countryside with a long-settled agricultural character, where arable land is enclosed by winding lanes and hedgerows,interspersed with woodland and heath and dissected by lush pastoral river valleys. A patchwork of cultivated land, numerous church spires, distant wooded horizons and big skies dominate the landscape.
This is a tranquil place, with isolated market towns, and scattered villages and farmhouses, their red brick and flint walls and pantile roofs an intrinsic component of Norfolk character. The area is rich in 18th-century estates and medieval churches, and the city of Norwich provides a cultural and economic centre. The many public rights of way (including the Peddars Way and Norfolk Coast Path National Trail and long-distance footpaths), country estates and parklands provide recreational opportunities.
Further information