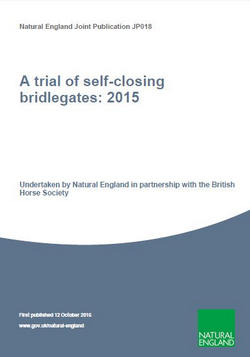 The 2015 trial held at Askham Bryan College was overseen by a working group including Natural England and representatives from landowning and user groups and the British Standard Committee. The trial did not aim to find one gate that was 'best’ but rather it looked for the elements of the gate that contributed to safe use, ease of use, stock-proofness and to a lesser extent robustness by investigating ten gates with different design features. A range of participants were invited to take part in the trial, these included horse riders, walkers, cyclists, mobility scooter and wheelchair users, the visually impaired and farmers. Information was gathered using questionnaires and the passage of each of the participants passing through the gates was recorded by video. The evidence was then analysed against a set of hypothesis tailored to each user group. In addition, the gates were tested with stock to establish that they were stock-proof; this is the first time that bridlegates have been tested in this way.