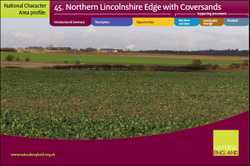 The Northern Lincolnshire Edge with Coversands National Character Area (NCA) comprises a ridge of Jurassic limestone running north from Lincoln to the Humber Estuary. The scarp slope rises prominently from adjacent low-lying land, forming the Edge or Cliff, and giving panoramic views out, in particular to the west. In the north is a second, lower scarp of ironstone. In the vicinity of Scunthorpe are the Coversands, post-glacial wind-blown sands which have given rise to mosaics of heathland, acid grassland and oak/birch woodland, supporting rare plant and animal communities akin to the Brecklands. Risby Warren, historically used as a rabbit warren, reveals the distinctive formation of inland dunes. Several of these sandy sites are designated as Sites of Special Scientific Interest, along with a number of disused limestone, ironstone and sand extraction sites, which comprise geological exposures alongside calcareous grassland, open water and other semi-natural habitats. At the northern boundary the limestone drops below the River Humber.
Further information