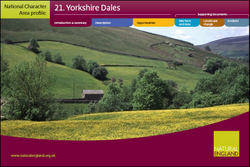 The Yorkshire Dales National Character Area (NCA), situated in the Pennine uplands, is a landscape of high, exposed moorland dissected by sheltered valleys or dales, each with their own character. Geologically, the south-west of the area is considered to be outstanding for its ‘karst’ (limestone) landforms, cave systems and exposures of Carboniferous rocks. Over two-thirds of the area falls within the Yorkshire Dales National Park and 17 per cent of the area falls within the Nidderdale Area of Outstanding Natural Beauty. The landscape is characterised by contrasts, especially between the dales below and the moors above. In the dales the environment is more sheltered and there are intricate patterns of walled fields, containing meadow grasses and wild flowers. Small villages and farmsteads, built of local stone, are tucked into sheltered corners, often with clumps of trees protecting them from the worst of the elements. On the dale sides, the network of walls continues with scattered stone field barns often appearing as distinctive features. The steepest slopes are frequently marked by the presence of sparse woodlands or sometimes open rock scree. There are large areas of actively managed grouse moorlands in the north and the east of the NCA. This enterprise makes a significant contribution to the local landscape character of areas such as Nidderdale and Swaledale.
Further information