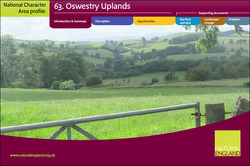 The Oswestry Uplands National Character Area (NCA) is a small yet distinct landscape of steep-sided, flat-topped hills mainly of limestone and narrow, wooded valleys and streams. It forms the eastern edge of the Clwydian Hills which extend from Mid Wales. The area has strong Welsh cultural associations which blend into this western edge of Shropshire. The hills rise quite steeply from gentle foothills crossing into the Shropshire, Cheshire and Staffordshire Plain NCA and overlook Oswestry, a typical market town of the Welsh Marches. Much of the area is deeply rural with small, irregular fields, copses, shelterbelts and woodlands. Scattered farms and hamlets are reached by narrow, winding and usually deeply sunken lanes. As the land rises, the irregular field pattern changes to a more rectilinear one with lower, frequently trimmed hazel hedges
Further information