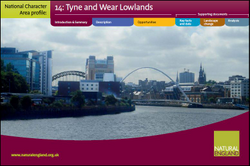 Tyne and Wear Lowlands National Character Area (NCA) is an area of gently undulating or rolling land, incised by the valleys of the major rivers and their tributaries. It is densely populated and heavily influenced by urban settlement, industry and infrastructure. Between settlements there are wide stretches of agricultural land.
The undulating land and broad valleys of the Tyne and Wear Lowlands are underlain almost entirely by Coal Measures rocks of Upper Carboniferous age. Mineral extraction has played a considerable role in the area and the legacy of coal mining remains evident in the landscape, although much restoration has occurred in recent years. Spoil heaps have been restored to pastures, mixed/coniferous plantations, amenity ponds and lakes (former open cast mines) and accessible green spaces such as country parks, and new networks of footpaths and cycle routes have been created along former wagonways.
Newcastle upon Tyne and the surrounding settlements cover a large area in the north of the NCA. Newcastle lies on the site of the Pons Aelius, a Roman fort on Hadrian’s Wall, at a strategic crossing point of the River Tyne. Hadrian’s Wall, which extends north-west from this NCA, is a World Heritage Site and the Hadrian’s Wall Path National Trail provides recreational opportunities for visitors and local people. During the Industrial Revolution, engineering, mining, ship-building and chemical industries grew along with the populations of Newcastle upon Tyne, Gateshead and Tynemouth.
Further information