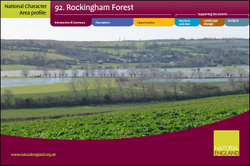 Rockingham Forest National Character Area (NCA) is essentially a broad, low, undulating ridge underlain by Jurassic limestone which falls away from a prominent, steep northern scarp overlooking the Welland Valley. Large areas of woodland remain a significant feature of the landscape and, while not forming continuous belts, the blocks of woodland often coalesce visually with hedgerow trees and smaller copses to increase the perception of extensive woodland cover across the landscape.
The landscape is a patchwork of woodland and large- to medium-sized fields of mixed arable with some pastoral use surrounding small nucleated villages. Fields are commonly bounded by well-managed hedgerows with mature trees or drystone walls and display the rectilinear pattern of the enclosures set within a more sinuous pattern of older enclosures, winding lanes and watercourses.
Popular today as a recreational resource, Rockingham Forest takes its name from the Royal Hunting Forest that existed across the area from the 11th to the 19th century. Historically, the heavy clay soils deterred widespread clearance for agriculture and so many of the woodlands are ancient. Formerly extensively coppiced, these woodlands contain a rich diversity of species that are of considerable nature conservation interest; several sites are designated as Sites of Special Scientific Interest (SSSI) and National Nature Reserves (NNRs) for this reason.
Further information