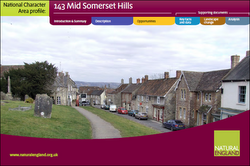 The Mid Somerset Hills form a number of low hills and ridges rising out of the Somerset Levels and Moors. They lie between the Blackdowns National Character Area (NCA) to the south and the Mendip Hills NCA to the north. The hills have a distinctive, predominantly pastoral character rich in hedgerows, farms and small villages, and often with expansive views over the flat Somerset Levels and Moors NCA to the west. Farming is now mixed, but the area was known for its sheep and leather used in connection with the shoe-making industry at Street.
Further information