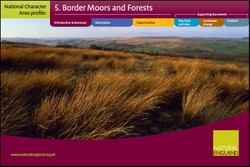 The Border Moors and Forests National Character Area (NCA) consists of an extensive, sparsely populated upland plateau, with long-distance views and a strong sense of remoteness and tranquillity. The rivers North Tyne and Rede form wide valleys through the uplands, while the rivers Lyne and Irthing flow south-west to the Solway Firth. The underlying geology consists of Carboniferous deposits which have weathered differentially to form craggy outcrops, with subsequent glacial and fluvial deposition. The high altitude and climatic conditions led to the build-up of peat deposits and the formation of a large expanse of upland mire habitats, much of which is internationally designated as Border Mires, Kielder–Butterburn Special Area of Conservation. The extent of these habitats has been reduced by widespread conifer afforestation, particularly at Kielder Forest which occupies the slopes around Kielder Water, a large, winding reservoir at the head of the North Tyne Valley which also forms a prominent feature in the landscape. The uplands are drained by small rivers in enclosed valleys, with the larger valleys sheltering upland hay meadows, scattered farmsteads and copses of broadleaved woodland. Much of the south-eastern area lies within Northumberland National Park. Military training areas also occupy large tracts of land.
Further information