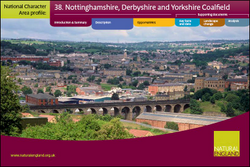 The Nottinghamshire, Derbyshire and Yorkshire Coalfield is an area that has seen great change over the past few centuries. The impact of widespread industrialisation and development on the landscape and settlement pattern within the National Character Area (NCA) is clear, influencing the visual and ecological landscape. The geological deposits of coal and iron, along with the water supply, brought mass industrialisation to the area to exploit these resources. A generally low-lying area, with hills and escarpments above wide valleys, the landscape embraces major industrial towns and cities as well as villages and countryside. Over half of the NCA (64 per cent) is currently designated as greenbelt land; this maintains some distinction between settlements and represents areas that are often under pressure for development and changes in land use. Very little of the NCA is designated for geology or nature conservation, but instead the landscape
is dotted with many pockets and patches of habitat where species find refuge. This is often on land that was once worked for minerals or occupied by major industry, and as these enterprises have declined the land they once dominated has opened up with opportunities to create a new landscape which will continue to provide a strong sense of place for local populations.
Further information