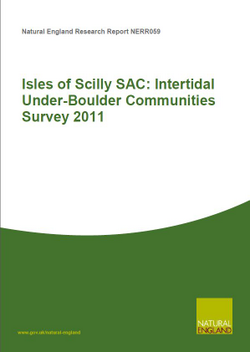 This report presents a monitoring survey into the range of species found within the Isles of Scilly ‘Rocky shore communities’ which is a sub-feature of the Special Area of Conservation (SAC), representing the intertidal regions of the ‘Reef’ feature. This includes the Biodiversity Framework (BAP) habitat ‘Intertidal under-boulder communities’. The objective was to survey intertidal rocky shore habitats below Mean Low Water (MLW), analyse biological samples to their lowest practical taxonomic level (in the field), identify biotope characteristics and establish a baseline and methodology for future monitoring. The survey also recorded the continued presence of rare species – some only recorded at the Isles of Scilly in the UK – and the presence of non-native species which may proliferate and compete with native species.

Some of the locations had previous records from surveys by local marine conservation enthusiasts and professionals, providing a baseline on species that were present in previous years.

Surveying of intertidal under-boulder habitats over 13 sites within the Isles of Scilly SAC was carried out in September 2011.