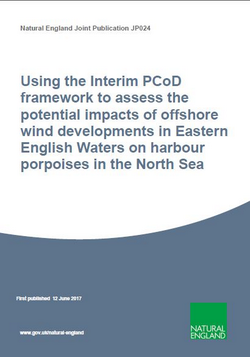 Wind farm construction can impact harbour porpoise primarily as a result of the underwater noise generated by the installation of foundations. Mitigation is available to prevent death and injury, but the wider consequences of disturbance on the harbour porpoise population remain unclear.

This study uses a population assessment model (the interim Population Consequences of Disturbance model – known as the iPCoD framework) to investigate the potential aggregate or cumulative effects that could arise from the currently planned 12 years of English wind farm construction on the North Sea harbour porpoise population.

There are limitations with such predictive models and also uncertainties in our knowledge of harbour porpoise ecology, movements, and in particular how disturbance affects vital rates. These are clearly stated within the report.

Population modelling exercises such as this one help to identify which elements of the interaction between noise and species might be the most important in influencing population outcomes. This in turn informs which key areas of uncertainty should be the focus of further work.

Natural England and JNCC will use these findings to advise on wind farm construction and noise management, particularly in important areas for harbour porpoise.