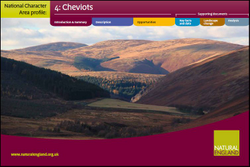 The distinctive, smooth, rounded hills of the Cheviots National Character Area (NCA) are part of the remote upland chain of the Northumberland moors which form the northern end of the Northumberland National Park. They rise steeply above the lowland belt of the Cheviot Fringe NCA to the north and east and the Border Moors and Forests NCA to the south. To the west, the rounded hills cascade into southern Scotland but the NCA is bounded by the Scottish border that follows a high natural ridgeline.
The distinct igneous geology has formed a sinuous cluster of rounded hills with tors on some hill tops, rocky outcrops and scree slopes on the northern flanks, and many other glacial and post-glacial features.
The wild, open upland landscape is dominated by rolling moorlands; there are extensive mosaics of heath, blanket bog and grassland, managed for sheep and cattle rearing and, grouse moors. Areas in the southern end of the NCA are also in use for military training. Large conifer plantations occur on some of the upper slopes, interrupting the smooth lines of the landscape.
Further information