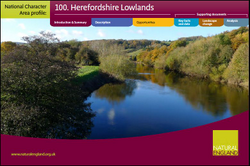 The Herefordshire Lowlands National Character Area (NCA) lies almost entirely within Herefordshire, with small areas to the north and east in Shropshire and Worcestershire and to the south-east in Gloucestershire. It is largely tranquil and rural in character but does include the larger settlements of Hereford and Leominster. There are small dispersed settlements of hamlets and villages, many of which contain older buildings with the local vernacular of black-andwhite timber-framed buildings. Restored cider barns with characteristic double doors and historic farmsteads are also common.
The landscape is gently undulating with steep-sided cornstone hills in the central area dominated by ancient woodland of ash and field maple or oak and bracken. Woodland within the area is a significant landscape feature, typically on the hill tops and valley sides. Many of these woodlands are actively managed (commercially) to produce quality timber, for example Garnons Estate. The NCA is an important area for commercial agricultural supported by the fertile and high-grade agricultural soils; the farming is mixed arable and livestock. Traditional orchards are still to be found, though suffering decline, with new orchards and dwarf varieties of trees also common. The area is also important for commercial production of soft fruit under polytunnels, supplying much of the UK. Historic parklands such as at Berrington Hall have many veteran trees that are important for invertebrates.
Further information