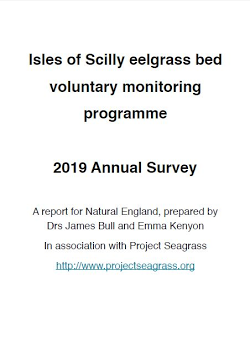 In this report, we present novel data from an ongoing, spatially replicated, annual study of a
comparatively un-impacted, temperate eelgrass habitat, based around the Isles of Scilly, UK. Five
sites were assessed: Broad Ledges Tresco, Higher Town Bay, Little Arthur, Old Grimsby Harbour,
and West Broad Ledges. Metrics include eelgrass (Zostera marina) shoot density, number of
leaves per shoot, maximum shoot length, as well as semi-quantitative recording of signs of wasting
disease and epiphyte cover on a leaf-by-leaf basis. Findings from this year’s survey, as well as
their place in continuous time series from 1996, are presented and analysed. This represents
twenty-four years of continuous annual monitoring around the Isles of Scilly.
Overall, eelgrass was present at all five survey sites around the Isles of Scilly but we found
significant variation in shoot density between survey sites this year. Longer-term trends reveal that
considerable annual fluctuations in shoot density show no consistent changes through time across
the Isles of Scilly.
Canopy height was found to differ between sites but this may simply be a feature of environmental
differences between sites, such as depth. No long-term linear trends in canopy height were found
at three sites. At Little Arthur a slight decrease is evident; whereas at Broad Ledges Tresco a slight
increase is observed.
Shoot density, number of leaves per shoot, and canopy height were combined into a measure of
leaf area index (LAI), estimating total photosynthetic area per unit ground. Significant differences in
LAI were observed between the five survey sites, with Little Arthur the most productive and Broad
Ledges Tresco the least (per occupied quadrat). Long-term declines in productivity are observed at
Higher Town Bay, with the other sites remaining relatively stationary.
The proportion of pre-determined quadrats located on eelgrass versus bare sand is used as a
measure of patchiness. Analysis of long-term trends showed that there have been significant
declines in patch occupancy at Old Grimsby Harbour (66% loss) and concerning losses at Higher
Town Bay (22% decline).
Long-term changes in wasting disease and epiphyte cover have been observed but without any
clear, linear trend. Interestingly, across the whole length of the survey, wasting disease prevalence
and epiphyte cover both differ significantly between survey sites. However, trends in disease and
epiphyte community are not the same more research would be needed to explore the drivers of
these dynamics.
Finally, we continue to see Sargassum muticum, an invasive species of brown seaweed known as
wireweed, at all surveyed sites in the Isles of Scilly. While this is not formally quantified, no obvious
changes in abundance or distribution were evident.
The synthesis of these findings again indicates concerning declines in eelgrass across the Isles of
Scilly and, in particular, at Higher Town Bay and Old Grimsby Harbour, since SAC designation in
2005. However, analysis of long-term trends at different scales point to patch creation and loss,
rather than within-patch dynamics, as the key processes to focus on to identify causes of decline.