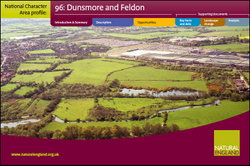 Dunsmore and Feldon is predominantly a rural, agricultural landscape, crossed by numerous small rivers and tributaries and varying between a more open character in the Feldon area and a wooded character in Dunsmore. The name Feldon refers to the old English term feld meaning ‘open cleared land’ and expresses the contrast, in medieval times, with the more wooded Arden area to the north-west. The area is mainly within Warwickshire, with the southern boundary delineated by the steep limestone escarpment of the Cotswolds, and the northern boundary by the Leicestershire Vales. To the west lie the well-wooded pastures of Arden, together with the Severn and Avon Vales, while the undulating pastures and low hills of the Northamptonshire Uplands form the eastern border.
It is an important food producing area and the agricultural expanse of large arable fields, improved pasture and small villages forms a transitional landscape between the surrounding National Character Areas (NCAs). The land to the north comprises the wedge-shaped area of low ridges and valleys lying between Leamington Spa, Coventry and Rugby, and is known as Dunsmore. This still retains a character of historic heathland and woodlands such as the Princethorpe Woodlands which are the most important cluster of ancient woodlands in warwickshire and an outstanding example of a large area of semi-natural habitat. The woods sometimes create a sense of confinement in the generally open landscape. The fringes of the plateaux are all similar in character but have open views framed by low hills and settlements.
Further information