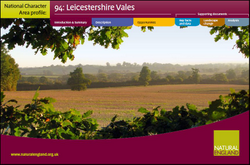 Leicestershire Vales National Character Area (NCA) shares many characteristics with the neighbouring Northamptonshire Vales NCA. The Leicestershire Vales extend between the town of Hinckley in the west to Leicester in the northeast and southwards towards Market Harborough and Lutterworth. This is a large, relatively open, uniform landscape composed of low-lying clay vales interrupted by a range of varied river valleys. Its sense of place comes less from its overall landform and more from its visually dominant settlements and views towards surrounding higher ground. The city of Leicester dominates the northeastern corner of the NCA.
Other large- to medium-sized settlements include the towns of Market Harborough, Lutterworth and Hinckley, with many attractive small towns, villages and buildings and features of historic interest in between. The north of the area has a predominance of settlements and a general lack of tranquillity; this contrasts strongly with the distinctly more rural feel in the southern part of the area, where a mixture of arable and pastoral farmland is found.
Further information