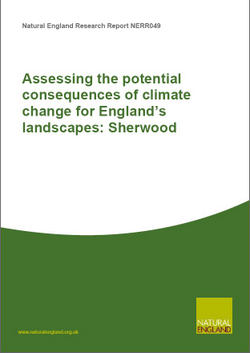 This study considered the vulnerability of the natural environment to climate change in the Sherwood area. This area encompasses the Sherwood heaths, which run north from Nottingham to Worksop; the Dukeries, an area of parkland and woodland south-west of Worksop; and the arable landscape of the sandstone estate in the northernmost part of the NCA. The Sherwood NCA lies over a major aquifer, supports nationally significant commercial agriculture, and contains internationally important wood pasture and parkland, large areas of lowland heath, and many buildings and landscape features of historic and cultural importance.

The vulnerability of the natural environment in the Sherwood NCA was assessed by considering how it is exposed to changes in climatic conditions, how sensitive it is to those changes (including its ability to adapt, which can be influenced by its current condition) and how much scope there is for conservation management to promote adaptation. This assessment of vulnerability is based on the best available scientific knowledge of how climate change might affect the natural environment and on discussions with local experts. The assessment considered both landscape assets (biodiversity, heritage, soils and geology) and its ecosystem service functions.