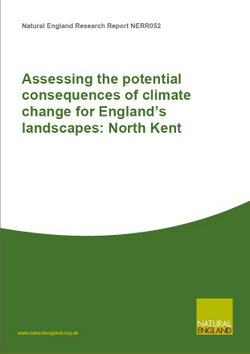 This study considered the vulnerability of the natural environment to climate change in North Kent. The North Kent study area is comprised of two National Character Areas (NCAs). These are the Greater Thames Estuary and the North Kent Plain NCAs where they fall in to the boundaries of the Medway Unitary Authority and Swale Borough Council. North Kent has a distinctively open and atmospheric character dominated by the extensive areas of grazing marsh on the Hoo peninsula, Chetney marshes, the Swale and the Isle of Sheppey. The Medway estuary is dominated by the urban conurbation of the Medway Towns (Rochester, Chatham and Gillingham) and has a strong historic military association. North Kent is typified by extensive open spaces within a predominantly flat, low-lying landscape. The pervasive presence of water and numerous coastal estuaries extend the maritime influence far inland. A strong feeling of remoteness and wilderness persists on the open beaches and salt marshes, on the reclaimed farmed marshland and also on the mudflats populated by a large and varied bird population. The open, low and gently undulating landscape is characterised by high-quality, fertile, loamy soils which are dominated by agricultural land uses. The area is rich in wildlife, supporting a wide range of important habitats such as floodplain grazing marsh, rivers, and coastal habitats such as mudflats and salt marsh.

The vulnerability of the natural environment in North Kent was assessed by considering how it is exposed to changes in climatic conditions, how sensitive it is to those changes and how much scope there is for conservation management to promote adaptation. This assessment of vulnerability is based on the best available scientific knowledge of how climate change might affect the natural environment and discussions with experts. The assessment considered both landscape assets (biodiversity, heritage, soils and geology) and its ecosystem service functions.