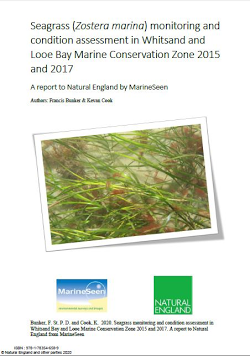 A seagrass bed off Looe in Cornwall (which is part of the Whitsand Bay and Looe Marine Conservation Zone) was studied using a drop-down video (DDV) survey carried out by IFCA (Inshore Fisheries and Conservation Authorities) in 2015 followed by a diving survey by Natural England (NE) in 2017.
The 2015 and 2017 surveys followed preliminary studies by Cornwall Wildlife Trust in conjunction with Looe Voluntary Marine Conservation Area (VMCA), Plymouth University, Cornwall College Newquay and the Environmental Records Centre for Cornwall and the Isles of Scilly Looe (Clark, 2011, Cornwall Wildlife Trust, 2012).
The IFCA DDV survey measured the extent and abundance of the seagrass off Looe and determined the bed to be of a patchy and fragmented nature. Comparisons of extent and density could not be reliably compared with that of Clark (2011) due to differences in methodology and GIS output.
The NE diving survey determined plant densities, plant lengths, incidence of flowering and the presence and extent of infection by the ‘wasting disease’ fungus Labyrinthula zosterae and degree of epiphytisation of leaves.
As expected from the patchy and fragmented nature of the seagrass bed, plant densities were low but plant lengths were comparable to that found in Plymouth Sound in 2018 (Bunker and Green, 2019). Incidence of flowering was high compared to that recorded in Plymouth Sound and infection by L. zosterae and degree of epiphytisation was low.
The survey methodologies currently employed together with ideas for improving them are presented. In particular, adopting the DDV methodology used in Plymouth Sound (Bunker and Green, 2019) and changing from transect based surveys to one of stratified random sampling to provide more statistical power to the data is suggested.