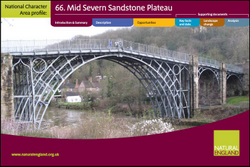 The Mid Severn Sandstone Plateau National Character Area (NCA) is located in the central catchment of the Severn and the lower Stour rivers and is a national watershed between the north- easterly flowing River Trent and the south-westerly flowing River Severn. The Mid Severn Sandstone Plateau is predominantly rural and important regionally for food production, with large arable fields in the central and eastern areas, and remnant areas of characteristic lowland heathland. Parklands provide an estate character in places, as exemplified by Weston Park. The plateau is drained by fast-flowing tributaries of the rivers Worfe and Stour which have incised the Permian and Triassic sandstones and conglomerate resulting in many steep-sided, wooded dingles throughout the NCA. The main river is the fast-flowing Severn, entering the NCA through the Ironbridge Gorge.
The NCA exemplifies the link between geodiversity, landscape and industrial heritage, in particular at the Ironbridge Gorge, a World Heritage Site widely recognised as the birthplace of the Industrial Revolution. During the 18th and 19th centuries, the area around the Severn Valley was recognised as being rich with raw materials: coal; iron ore; limestone to flux the slag in the blast furnaces; sand for moulding cast iron; clay to make tiles, bricks and refractory linings; and the finest clay used for the manufacture of porcelain at Coalport. The world’s first iron bridge, constructed in 1779 by Abraham Darby III, spans the River Severn in the steep-sided, wooded gorge that belies its industrial past.
Further information