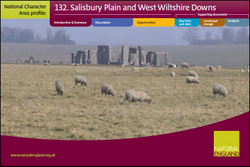 Salisbury Plain is a sparsely settled, predominantly agricultural area with a strong sense of remoteness and openness. The dominant element in the landscape – apart from the expansive sky – is the gently rolling chalk downland, forming part of the sweep of Cretaceous Chalk running from the Dorset coast and across the Chilterns to north of the Wash.
The Plain is designated as both a Special Protection Area and Special Area of Conservation (SAC) under European legislation, notably for the populations of stone curlew and hen harrier, and for the chalk grassland habitat, one of the largest remaining areas of calcareous grassland in north-western Europe. Much of the natural environment is also protected through its designation as a Site of Special Scientific Interest for its populations of rare bumblebee species, and many rare birds, plants and invertebrates.
Further information