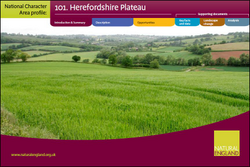 The Herefordshire Plateau National Character Area (NCA) lies mostly within Herefordshire but also extends into Worcestershire. The Herefordshire Plateau rises abruptly out of the Herefordshire Lowlands NCA to the west and south and from the Teme Valley NCA to the north and east, with which the Herefordshire Plateau NCA shares many common characteristics. A deeply tranquil, rural character is one of the treasures of this area, as it has largely escaped the pressures of modern development. It retains much of its historical built character and is sparsely populated with hamlets, isolated churches, small manor houses, local country houses within parks and traditional buildings.
Composed of Old Red Sandstone, the rolling landform and small, narrow valleys overlain with shallow, poor soils and heavier loams and clays give rise to medium- to large-scale arable fields dominating the open, flatter plateau and river flood plains. Smaller and more irregular areas of pasture and mixed farming occupy the surrounding rolling countryside, with hop fields and hop kilns at the outer fringes and timber-framed manor houses dating back to the 14th century.
Further information