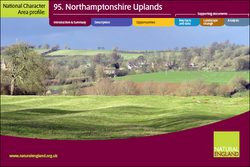 The Northamptonshire Uplands National Character Area (NCA) is an area of gently rolling, limestone hills and valleys capped by ironstone-bearing sandstone and clay Lias, with many long, low ridgelines. Rivers flow out from the NCA in all directions, including several major rivers – the Cherwell, Avon, Welland, Tove, Ouse, Nene and Ise. While there are areas of differing character, there are strong unifying landscape features across the Northamptonshire Uplands, most importantly the extensive areas of open field systems with ridge and furrow and the earthworks of deserted and shrunken settlements which occur throughout. Other features include the strong, mostly Parliamentary enclosure pattern with high, wide, A-shaped hedgerows bounding the largely rectilinear fields with their frequent mature ash and oak trees; the many country houses and their associated extensive areas of historic and nationally important designed parkland landscapes; the distinctive ironstone, cob and brick nucleated settlements with their large stone churches, often with prominent steeples; the narrow lanes with very wide grassy verges; and the small, scattered but prominent broadleaved woods and coverts. There are also wide, long-distance views from the edges and across the ridgetops throughout the area.
Further information