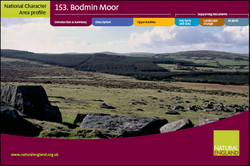 The remote, open upland moorland landscape of Bodmin Moor provides a stark contrast to the more productive landscape of the surrounding area. The edge of the moor is fringed with deciduous damp wooded valleys, which contain dispersed farmsteads that are linked to the larger areas of common land on the higher granite-strewn moorland.
Nearly 71 per cent of the National Character Area (NCA) is included within the Cornwall Area of Outstanding Natural Beauty. There are important mining areas forming part of the Cornwall and West Devon Mining Landscape World Heritage Site. A third of the NCA is registered common land, with a higher proportionbeing declared open access under the Countryside and Rights of Way Act 2000. The area includes three Special Areas of Conservation (Crowdy Marsh, Phoenix United Mine and Crow’s Nest, and River Camel) and nearly 5,400 ha of land designated as Sites of Special Scientific Interest covering habitats from upland heathland to wet woodland, species such as marsh fritillary and golden plover, and geologically important areas and features. The geology and formation of the area illustrate many aspects of earth science and human history. It is dominated by the Bodmin Granite and its associated tors and mineral deposits. The concentration of these elements in the south-east corner of the moor makes it an internationally important site for geological study.
Further information