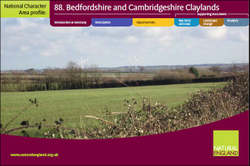 The Bedfordshire and Cambridgeshire Claylands National Character Area (NCA) is a broad, gently undulating, lowland plateau dissected by shallow river valleys that gradually widen as they approach The Fens NCA in the east. Within it, but distinct from it, is the Bedfordshire Greensand Ridge, a contrasting narrow and elevated outcrop of Greensand, with its associated habitats on acidic soils such as grassland, heathland and woodland. Views of the Bedfordshire and Cambridgeshire Claylands NCA and its large-scale arable farmland can be seen in most directions, from the elevated ground of the Yardley Whittlewood Ridge, Bedfordshire Greensand Ridge, East Anglian Chalk and Chilterns NCAs.
The NCA contains the Forest of Marston Vale – one of 12 Community Forests in England – and to the south, around Luton, a small proportion of the Chilterns Area of Outstanding Natural Beauty (AONB). While predominantly an arable and commercially farmed landscape, a wide diversity of seminatural habitats are also present within the NCA, including a number of internationally important and designated sites that support a range of species – some rare and scarce – and offer opportunities for people to have contact with the natural environment. The River Great Ouse and its tributaries meander slowly and gently across the landscape.
Further information