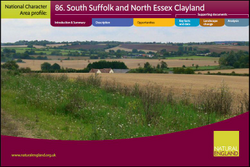 The South Suffolk and North Essex Clayland National Character Area covers the four counties of Suffolk, Essex, Hertfordshire and Cambridgeshire. It stretches from Bury St Edmunds in the north-west to Ipswich in the north-east, roughly following the line of the A14 trunk road through the Gipping Valley. It then embraces the Colchester hinterland before encompassing the urban areas of Braintree and Chelmsford in the south and stretching to Bishop’s Stortford and stevenage in the west.
It is an ancient landscape of wooded arable countryside with a distinct sense of enclosure. The overall character is of a gently undulating, chalky boulder clay plateau, the undulations being caused by the numerous small-scale river valleys that dissect the plateau. There is a complex network of old species-rich hedgerows, ancient woods and parklands, meadows with streams and rivers that flow eastwards. Traditional irregular field patterns are still discernable over much of the area, despite field enlargements in the second half of the 20th century. The widespread moderately fertile, chalky clay soils give the vegetation a more or less calcareous character. Gravel and sand deposits under the clay are important geological features, often exposed during mineral extraction, which contribute to our understanding of ice-age environmental change.
Further information