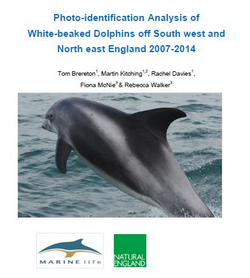 This report was commissioned by Natural England to gain an understanding of the distribution and structure of white-beaked dolphins Lagenorhynchus albirostris, in English inshore waters. The photo-identification analysis undertaken by Marinelife using their existing database (2007-2014), identified a maximum abundance of 131 individuals (range 99-211, 95% CL) and a high number of recaptures of individuals in the South West, and a crude estimate of 150 individuals in the North East of England (where there was a lower number of recaptures of individuals).

A single management unit (IAMMWG 2015) across the UK is considered appropriate to represent the full range of the species, but it is also accepted that this species usually occurs on the continental shelf (i.e. in waters <200m depth) (Reid et al 2003). For conservation purposes, there is still a need to identify critical habitats such as feeding, breeding and nursery areas, and areas where animals are known to persistently occur. This project aimed to investigate persistent use of white-beaked dolphins in two areas in the UK; first across the South West of England (with most sightings in Lyme Bay) at the southern periphery of the species range, and second the North East coast of England with most sightings in the Farnes Deeps and Northumberland coast. The reasons for use by the dolphins in both of these areas remains unclear.