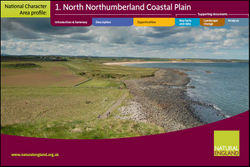 The North Northumberland Coastal Plain is a narrow, windswept strip that runs from the Anglo-Scottish border south to the mouth of the River Coquet, bounded by the sea to the east and the Northumberland Sandstone Hills to the west.
The gently undulating inland plain is dominated by arable farming, with large, regular fields bounded by gappy hedgerows and in some places grey sandstone walls, with some pasture for beef cattle and sheep. Woodland cover is sparse and predominantly confined to the river valleys that meander across the coastal plain and the estate woodlands around Howick.
The dramatic coastline is exceptionally varied, with rocky headlands and cliffs contrasting with long, sweeping sandy beaches backed by dunes, and extensive intertidal mudflats and salt marsh around Lindisfarne. The nationally important Whin Sill outcrops both inland and at the coast, supporting rare Whin grassland, and forming the distinctive rocky Farne Islands offshore.
Further information