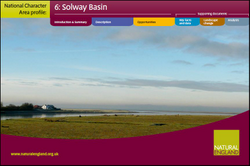 The Solway Basin is a low-lying National Character Area (NCA) of gently undulating low hills that grade into the coastal plain and estuarine landscape of the Solway Firth. To the east and south and across the lowlands of the Dumfries coast to the north, the lowland landscape is framed by the uplands of the Lake District, the North Pennines and southern Scotland. The area has a long history as border country, originally divided by the Roman frontier of Hadrian’s Wall, which has World Heritage Site designation, and through succeeding centuries it has been a part of the disputed lands of the English–Scottish border. The area is dominated by pastoral agriculture in rectilinear fields bounded by hedges but with increasing arable farming on the low hills. The coastal zone is characterised by a more open, wind-swept, dynamic and tidal landscape of salt marshes, beaches, sand dunes and intertidal flats along the margins of the Solway Firth and the Irish Sea.
Further information