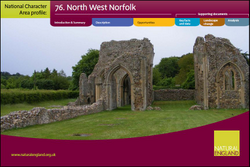 North West Norfolk National Character Area (NCA) has a very open, rolling topography which contrasts with the surrounding coastal, fenland and other lowland NCAs. It extends from Downham Market on the edge of the Fens east towards Castle Acre, and skirts Fakenham before sweeping eastwards into a narrowing triangular area abutting the western edge of the Cromer Ridge.
This NCA is very important for agriculture with a large-scale arable and grassland landscape comprising extensive arable cropping and some areas of mixed farming, – the dominant livestock type is pigs. The name ‘Good Sands’, often applied to the eastern half of this area, derives from the fertility of the versatile light soils which distinguish the area from the low-fertility sands of Breckland to the south. Many of the villages are centred on greens or ponds and built from local vernacular materials – carstone and chalk in the west with flint becoming characteristic further east, reflecting the underlying geology. Aquifers underlying the NCA and extending well beyond its boundaries provide water both locally and regionally.
Further information