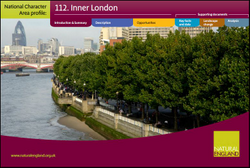 Predominantly urban, the Inner London National Character Area (NCA) lies at the centre of the Thames Basin on a broad flood plain which rises in gentle terraces, providing panoramic views of London’s skyline from the clay plateaux and ridges in the north at the border with the Northern Thames Basin. The NCA is steeped in both historical and contemporary culture; it is the centre of UK Government and a major international hub for finance, business, tourism, transport and recreation. Owing to its urban nature, Inner London relies heavily on ecosystem services provided by the surrounding NCAs, such as flood alleviation, air temperature regulation and recreational services. For example, the Thames Barrier in the Greater Thames Estuary is a major tidal flood defence for London.
However, the extensive network of green infrastructure throughout the NCA, including Local Nature Reserves such as Camley Street, provides outdoor recreation and wildlife habitat close to people’s homes and places of work. Reservoirs and wetlands such as the Lea Valley in the east provide opportunities for birding and fishing, as well as walking, cycling and boating.ater-based activities are provided along the Thames and its tributary rivers, the Grand Union Canal and Docklands. Parks and green spaces scattered among the built environment provide highly valued pockets of perceived tranquillity. Nevertheless, many communities in London suffer a shortage of green space close to where they live. The Thames Path National Trail also provides extensive walking opportunities following the river together with strategic walking routes such as the Capital Ring and the Jubilee Walkway.
Further information