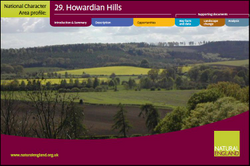 The Howardian Hills are a clearly defined belt of irregular, rounded ridges of Lower, Middle and Upper Jurassic rocks with intervening sheltered valleys, a diverse landscape of woodlands, historic buildings, designed parkland and villages, and rolling arable land on ridges and open plateaux.
Three-quarters of the Howardian Hills National Character Area (NCA) is within the Howardian Hills Area of Outstanding Natural Beauty (AONB), which lies immediately to the south-west of the North York Moors National Park; 3 per cent of the NCA lies within the National Park boundary. The ridges afford extensive views to the Vales of York and Mowbray to the west, and the Vale of Pickering and the Yorkshire Wolds to the east. It is in the Vale of Pickering that the River Derwent rises and, unusually, begins its journey inland, forced away from the sea by glacial ice during the last ice age and through the glacial outflow channel at Kirkham Gorge, into the Howardian Hills and from there southwards towards the Humber estuary. The Derwent is an important natural feature of the NCA: it is of European importance as a Special Area of Conservation (SAC) supporting otter, bullhead, and both river and sea lamprey.
Further information